Thanks to the preeminent journalist and truth teller, Robert Fisk, wondering why no one has proposed a Berlin-style airlift to Gaza—people severely oppressed, imprisoned, starved, political rights curtailed, true of Gaza as it was true for the East Berliners—I’ve decided to organize an airlift of more moderate proportions. Of course he could answer why there has been no airlift for Gaza, not even a proposal (except by George Galloway, taking a different form) but I thought stating it was brilliant. His words follow my suggestions if you’re interested.

My proposal is that we airlift humanitarian aid, awareness, concern, and activism into Gaza using money. Dollars work, shekels (the national currencies of both Palestine and Israel work, Euros work, and most any sort of money can be translated into support for the Gazans and fuel for breaking the siege.

More about the siege and current conditions on my blog piece, “Gaza Overview.”

(This airlift is not to be confused with a related but far different idea from George Galloway, actually using aircraft to deliver humanitarian aid and break the siege.)

If you would like to participate in a small-scale monetary airlift into Gaza, here are several ways you can donate money to help. Just in time for holiday largesse.

1. The Gaza Community Mental Health Program, one of the major healing centers for the widespread trauma afflicting Gazans, via its North American affiliate, The Gaza Mental Health Foundation Inc. They are in special need of a relatively high quality digital camera. I’m with them in Gaza now thru the end of December 2010. 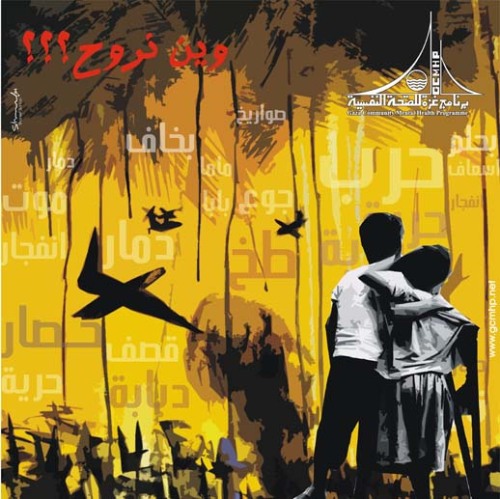 Information about the Program

2. The American Friends Service Committee’s (AFSC) Middle East program based in Chicago. They are in the forefront of Quaker-related service and advocacy for Gaza. I participated in a fundraiser for them recently. (Information about the context)

Information about the program

3. The Middle East Children’s Alliance work in Gaza. When MECA asked school children what they most needed, the overwhelming response was fresh water. So they now provide water purification systems to schools, the Maia Project. I plan to photograph various installations while I’m in Gaza. I also work with its Gaza project director, Dr Mona Al Farra.

To donate to overlooked individuals and organizations that I identify, use PayPal via my website. Look for the PayPal icon on the right of the home page. Please mark your contribution “FOR GAZA.” Or send a check by December 25 to my home at 9 Sacramento St, Cambridge MA, 02138-1843 marked “FOR GAZA.” Please email me with the amount so I can add it to what I donate in Gaza.

Thanks for your attention and possible financial contributions. May the holidays be holy, festive, safe, and enlightening for us all.

Robert Fisk about the Israeli attack on the humanitarian aid flotilla on May 31, 2010:

At the time of the Gaza siege, indeed at the time of the Turkish convoy, siege breaker, flotilla, call it what you like. What was very interesting was that you know, there was a very good precedent for what we might have done over Gaza in a different place and in a different time. It involved a people who were surrounded and starving, they were surrounded by a fence and a very brutal army and we Americans and British, our servicemen risked their lives and sometimes died to save those people, whom only 3 years earlier we had been fighting. We saw them as terrorists 3 years earlier, but we dropped supplies to them, we flew into their enclave, their ghetto, to feed them and protect them from the brutal army around them and it was called the Berlin Airlift and yet not once have I ever seen a report on television, radio, not even on Al Jazeera and I dared them to try it – mention that there was a parallel. If we could do the Berlin airlift for the people of Berlin, why couldn’t we do a Gaza airlift for the people of Gaza? We all know the reasons, we all know the reasons why not. But our failure to point out that there was a precedent is part of the way in which we have succumbed to the language, the spikes, the surges, the peace process, the dispute or the occupation and so on, so forth and I have increasingly felt in recent years and I’ve been in the Middle East for more than 3 decades, but that doesn’t necessarily mean that I know a lot, I know less each day, of course, but I believe now in fact that American policy can’t be fixed.

One thought on “Airlift to Gaza”