From my journal and letters, my dispatches from the field and now from home in Cambridge Massachusetts, after I had photographed internally expelled Palestinian refugees in the West Bank and Gaza (once I can enter Gaza), plus their ancestral homelands. (I and the Alternatives to Violence Project, AVP, team plan a return journey in early summer 2019.)

We [the Haganah, precursor to the official Israeli military, IDF] adopt the system of aggressive defence; during the assault we must respond with a decisive blow: the destruction of the [Arab] place or the expulsion of the residents along with the seizure of the place.

—David Ben Gurion, leader of the Jewish community in Palestine and later Prime Minister, December 19, 1947, cited in Simha Flapan, The Birth of Israel: Myths and Reality

Yesterday [October 14, 2018] I found or believe I found Al Qabu, the village of Nidal Al-Azraq’s family. I’d first first explored the nearby Israeli village/moshav/kibbutz, Mevo Beitar. And also Ilar/Alar/Ellar (alternate English spellings of Arabic names), the village of Ahmad Ali Dawoud’s (who I’d interviewed and photographed). Plus the Israeli site, Bar Giora. I need to consult my photos with the GPS coordinates to pinpoint reliably were I was, except maybe in the case of Qabu. Because of alternate transliterated spellings, Hebrewized names, lack of experience with Arabic and Hebrew names generally, and the intentional erasure of Arab villages, this is one of the most complicated photographic projects of my life.

Qabu presented a special challenge: where exactly was or is the site? As often happens (me searching for Rachel Corrie’s death site in Gaza for instance), various people had various ideas. A woman in a gas station, the station rumored to be near the site, confirmed that yes, this is the site. So I surveyed from a distance an open field, gently sloping, with curious concrete platforms and possible stone markings—and occasional clumps of prickly pear cactus, otherwise known as sabra (which is also the name of first generation Israelis).

Driving thru an open gate, thinking, yes, Qabu, let’s find the Crusader church reported to still exist in Qabu—over rough roads, oh valiant friends—I ended up at a cemetery. Cars were parked outside, a woman told me it was not the church but a Jewish cemetery, and thus I concluded, this is not Qabu.

Out comes my laptop; up comes the info I’d collected; no help. Then I remembered Nidal’s description: immediately right after the checkpoint. Going which way? I emailed him, no answer. I guessed: coming from the West Bank. So I went thru the checkpoint on the 48 Armistice Line, headed into the West Bank, noticed as I passed (not sure I’d be stopped, questioned, what I’d claim), a forest area on my left, which would be on the right coming into Israel. Now in the West Bank I turned around, slowed down after the checkpoint (no interrogation, the guards looked bored, as guards often do, devoting eons of their lives to just waiting for something to happen, trying to remain awake and vigilant), videoed the fence which I thought would prohibit me from entrance, considered hopping the fence, decided against it, and then saw a sign to “Begin Park.” Once in the park I learned it commemorated the former Prime Minister and possible war criminal, Menachem Begin.

How ironic, if this is Qabu. Exploring, I found a shrine and several other Arab indicators, a stonewall, a pool possibly for collecting water or bathing. Because the day waned, the light faded, I decided not to search further for the church. My mission is not to find historic sites, but to establish contact with ancestral sites and make some good photos.

Earlier, maybe at Mevo Beitar or Bar Giora (they merge in memory), I’d sought overnight housing. A young pregnant woman I asked turned her infant over to her grandmother (life goes on), walked me to a home she thought might offer housing. The woman in the house phoned someone, her sister-in-law I think she said, and put me on the phone. 550 shekels/$150. Beyond my budget, I answered. What is your budget, thinking, calculating—200 shekels/$50. Sorry no deal, she said. I drove on.

Life is tough on the Israeli road when not in the cities.

Yesterday or the day before, Ayed in Aida refugee camp had written me, in support and yearning:

Hello my friend skip. I hope that things are going well with you. I couldn’t be with you Saturday even though I am dying to visit beit jibreen and other villages. Lucky you, my friend. I am so thrilled, honored and happy about meeting you and knowing you. I wish all the best.

Hello dear friend, ayed. I too am sad we couldn’t be together THIS TIME, maybe later. I explored ajjur today, now sit in the new moshav of agur, wondering where to go next. Maybe beit jibreen.

Earlier, before I’d located Qabu, in what is probably another destroyed Arab village, now called Britanya, at the first picnic site, I sat along the road beside my car eating my lunch. Gradually joyful sounds came closer to me until they came from directly behind me. I turned around and discovered a children playing in a large tree, the same family I’d spotted earlier at a picnic table and surreptitiously photographed. A boy about 14 years old asked me what I was doing (the only inquiry so far, and not with suspicion or rancor). I answered photographing beautiful nature (a half-truth, or one-quarter truth. Consulting with some of the adults he recommended about five sites including the Dead Sea. Later the two families set off on a hike into the valley. I learned that this trail system is art of a cross-nation trail. I’ve seen lots of bikers and signs warning of cyclists. A physically healthy and happy nation, or so it seems.

I pondered asking the boy, say, do you know anything about the history of this park, did anyone live here long ago? 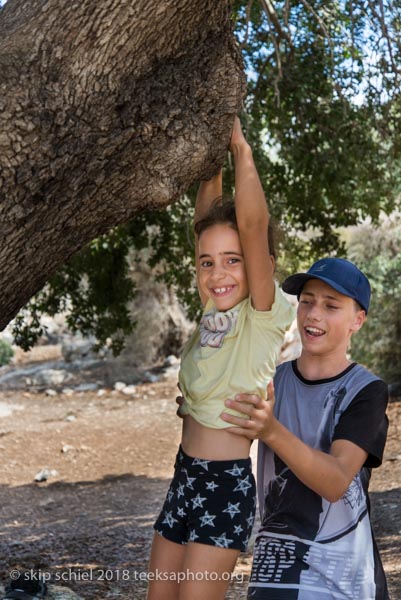 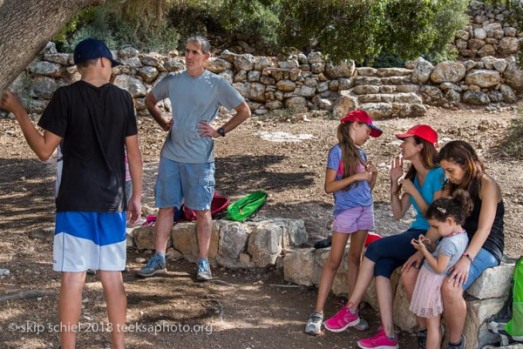 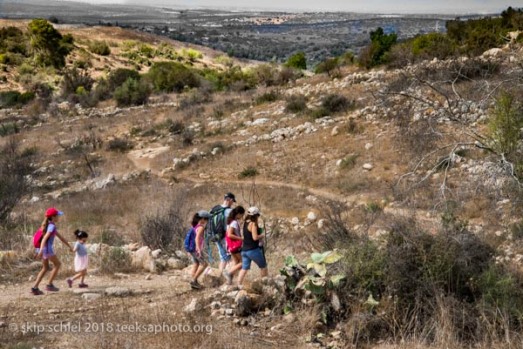 My excursion provokes several thoughts. What was life on the road for the refugees of 1948 and 1967, in the Qabu to Bethlehem case, a climb and descent of 200 meters or 650 feet, and a distance of 14.3 km or nearly 10 miles? Carrying the little luggage and valuables they could carry, possibly carrying the elderly. Unsure if they’d ever return to their homes. Where to go for refuge? How to establish a new home? Where’s the justice in all this? Would they survive? Living in a tent, in a camp, in the winter. With many other families. All we want is to be ordinary, said Darwich.

Another thought: homeless in the USA, the richest country in the world, perhaps, and in history, perhaps. Yet people live on the streets, Chip for instance, thru the year, in the winter, Chip apparently sufficiently provisioned even if minimally so.

Another: displacement because of gentrification. The folks who consulted with me about 11 Sacramento St, Cambridge Massachusetts, my new neighbors, and now have moved in, may have displaced Nicole and Ronen. Where do Nicole and Ronen go, why was they displaced? Or Stan, my buddy Stan, who by now may be out of his apartment, maybe in Arlington elderly housing with much less space? I wrote him a few days ago, hope to hear at least moderately good news from him. I may write his daughters.

Or me, potentially, forced out because of gentrification. Or earlier as a 14-year-old boy—not forced displacement for my parents—but for me moving from Chicago’s South Side, away from friends I’d grown up with for 10 years, this was an abrupt and painful displacement.

Palestinian Refugees & their Ancestral Lands (or On Our Way Home)—part 14—Jalila Al Azraq (Um Qasim), 80 years old, from the village of Al Qabu by Skip Schiel

In Menachem Begin’s Rise, Lessons for the #Resistance to Trump, By Liel Leibovitz

A Conversation With The Palestinian Non-Violence Activist Who Sparked Gaza Marches by Steve Bynum (February 28, 2019)