From my journal, letters, and other writing about internally expelled Palestinian refugees in the West Bank and Gaza (once I can enter Gaza), plus their ancestral homelands. These dispatches based on my latest work in Palestine-Israel from mid-May to mid-July 2019.

(Thanks to Ayed Al Azza)

That even in the darkest of times we have the right to expect some illumination, and that such illumination might well come less from theories and concepts than from the uncertain, flickering, and often weak light that some men and women, in their lives and their works, will kindle under almost all circumstances and shed over the time span that was given to them. 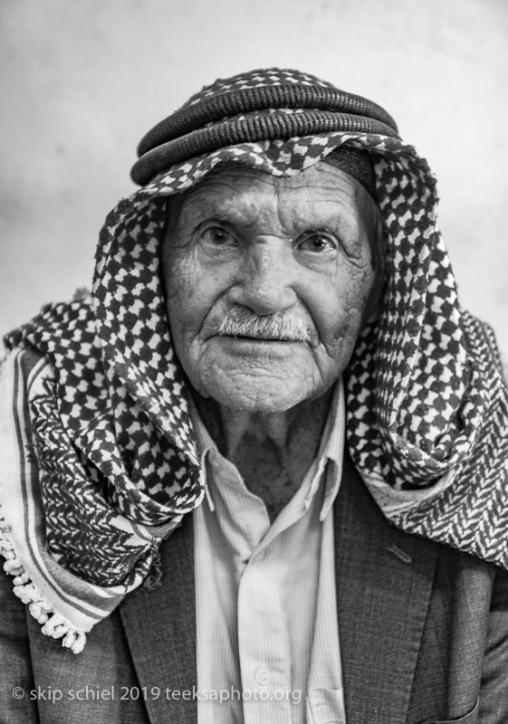 After my recent series of interviews and portrait sessions I realize, as expected, the stories tend to be repetitive, except of course for the locations of the destroyed original villages. Most villages were primarily agricultural; people reported they led pleasant and safe lives (few spoke about encroaching Jews). The Nakba in many cases occurred during Ramadan in early summer; some people were about to harvest corn but needed to flee—the unleavened bread story from Jewish scripture. Most had good relations with neighboring Jews, and all were forcibly expelled with little help from other Arabs or the international community. Some expressed fierce anathema toward some Arab countries, including Egypt which Issa told us had soldiers stationed nearby but the soldiers had done virtually nothing to help.

The stories blend together. I believe I can remember and concentrate much better when I meet no more than 3 people each day, with gaps between. Ideally, 1 each day but logistically this would stretch out my work too far. When I write my speaker notes as I try to do daily, I anticipate much confusion. The audio recordings will help, as will the photos. Today [June 11, 2019] I intend to make a second directory like the one I made last year, send it to my Palestinian colleagues, Ayed and Fareed, to get names and villages straight. Then sketch the stories, and later use the recordings.

Today [June 10, 2019] to Deheshe and Azza refugee camps in Bethlehem (Azza now renamed by UNRWA Beit Jibreen after the area most residents come from). For this project my first time in both camps (I’ve visited both on earlier trips). Interviewing and photographing the first couple, Issa Younis Al Azza, aka Abu Ahmed and his wife, Aisha, 10 years younger, led to interviewing their son, Ahmed, and then his wife, Shahrazad (just getting all the unusual and some times repeated names straight is itself a major challenge—Ayed is invaluable). Then with the second couple, using English, a long, well informed, impassioned, congenial conversation (all in English), joined by their son, Ahmed, the grandson of Issa and Aisha, about their situation and the USA role in it. All recorded, how much to use is a question. This type of intense conversation may be a first for me in this project.

When expelled from the same village, Issa was 19, Aisha, his wife, 9. He’s now 91 and she 80. Their age difference is apparent. I noticed it immediately.

Their village, Beit Jibreen, is southwest of Hebron about 43 km/26.7 miles. (walking time via Googe Maps to Bethlehem is about 9 hours, an altitude change of 650 meters/2,100 feet. Imagine walking this distance in 1948 with whatever clothes, food, etc one could carry; vehicles were sometimes available.) In fall 2018, I’d visited the village, now replete with archeological details, designed by Israel to be a tourist site. While living there, Arab people understood the site was rich in history, deep history, dating back at least to Greek and Roman times. They understood people had inhabited the region over millennia. (After the Nakba, Israel excavated more of the area; shockingly, but not surprisingly, there is no mention of Arab times.) While in the early part of the 20th century, when Issa and Aisha lived there and for centuries earlier during Arab times, Christian brothers lived in the Crusader church. Many people have interviewed the couple; at least locally, i.e. in the West Bank, their story is well known.

Relations with neighboring Jews were good. But during the Nakba, Jewish militia shelled the Egyptian outpost there, and the Egyptian soldiers fled during a full moon night. Soon after the expulsion, Issa snuck back into the village to retrieve belongings and harvest, and Jews shot at him.

Equally valuable during this interview I spoke with their son, Ahmed Al Azza, a retired teacher, and his wife, Shahrazad. Together they founded a kindergarten in the camp. They need to raise money to continue its operation. With Ayed’s help, we discussed the possibility of crowdfunding. They showed me on a smartphone a video of a Jordanian TV interview with Aisha, Ahmed’s mother, when she returned to Beit Jibreen. Recounting her experience as a young girl before Nakba, she looked visibly pained. (I’ve not been able to find the video on the Internet.) They confided to Ayed and me that earlier when Ayed had approached the elders about my visit, Aisha had expressed suspicion, I’m not sure why. I’ve heard from other sources that some interviews can either distort the message or lead to troubles with the authorities.

Shahrazad Al Azza showing some of her students

Ahmed (the son), a championship chess player (he showed me many trophies), brought Ayed and me to the top floor. As is true in all the camps, residents build up because of restrictions by Israel and presumably UNRWA which administers aspects of the camps. Aided by his sons, one in particular, another Ahmed, Issa and Aisha’s grandson, the family saves money and when enough accumulates they add another room or level.

Ahmed brought us to the local cemetery and on the way showed us a community building erected for social gatherings for people from Beit Jibreen.

In another video we watched, Issa at the destroyed village, he wept. Later he told us he wished to be buried in Beit Jibreen. I asked if that would be allowed. No answer. Which raises a question about how neighboring Israelis will treat the gravesites. Do the dead and dying have the right of return?

Bayt Jibrin by All That Remains

Blind Spot at a Heritage Site, by (de) colonizer (2015)
A research and art laboratory for social change, working to challenge the colonialist nature of the Israeli regime. To learn more please visit www.de-colonizer.org.

Mapping what’s been lost, by Eitan Bronstein Aparicio (2014)
How the Canada Park region [erasing Arab habitation history] has become completely Israeli in at least two ways: 1) It was “annexed” to Israel and “naturalized.”  No signage indicates it’s located beyond the Green Line, there’s almost no trace of the Palestinian villages Israel captured and demolished during the 1967 war and an attractive Keren Kayemeth LeIsrael (KKL) forest has been planted serving thousands of visitors annually.  2)  Israel never agreed in negotiations with Palestinians to relinquish the area; the Zionist leadership expects it to remain part of Israel.

One thought on “The Ongoing Nakba—Thru the Generations: Issa Yousef Al Azza & family”