From my journal, letters, and other writing about internally expelled Palestinian refugees in the West Bank and Gaza (once I can enter Gaza), plus their ancestral homelands. These dispatches based on my latest work in Palestine-Israel from mid-May to mid-July 2019.

The 1948 Palestinian exodus from Lydda and Ramle, also known as the Lydda Death March, was the expulsion of 50,000–70,000 Palestinian Arabs when Israeli troops captured the towns in July that year. The military action occurred within the context of the 1948 Arab–Israeli War. The two Arab towns, lying outside the area designated for a Jewish state in the UN Partition Plan of 1947, and inside the area set aside for an Arab state in Palestine, subsequently were transformed into predominantly Jewish areas in the new State of Israel, known as Lod and Ramla.

For this writing I draw gratefully from Fareed Taamallah’s interview in Arabic, translated by him and revised slightly by me. Published on his Facebook page.

Rajab Mustafa Ghanem, 19 years old in 1948, the Year of the Nakba, worked with his father in a grocery store in the city of Lod/Lydd. Hearing about Jews forced to flee from Europe, he believed Palestinians were to live with them and give them shelter because they were victims of war. Forced from his home by what he called “Zionist gangs,” his family fled by foot, carrying no food or water, first to Ramallah, and then by truck to Gaza, the Bureij refugee camp. After Israel occupied the West Bank and Gaza in 1967, he moved to the Amari refugee camp in Ramallah. He never saw his city again, nor his father and mother who remained in Gaza and died there. Today, 90 years old, he told us his only wish is to die and be buried in dignity in his hometown, Lod, and not in Amari as a refugee.

One early morning day in May 1948, the Zionist militia or gangs attacked the city with planes, tanks and artillery and told people to surrender. The men were asked to go to the Dahmash mosque. Many went there and the mosque was filled with men. But there was no room for Rajab and his father. The gangs entered the mosque and ordered the men and boys to lie on the ground, shot and killed hundreds including some of Rajab’s friends and relatives. 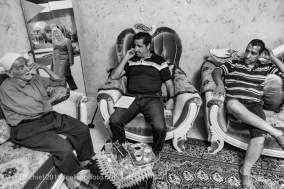 With Fareed Taamallah, my colleague and translator

The Zionists forced thousands of people of the city, including Rajab and his family, to go east out of the city on foot without allowing them to carry anything, out of town, into the unknown. They walked all day without water or food, and some died on the way. Until they arrived in Ramallah a few days later. Then from Ramallah, he went by truck with his family to Gaza, specifically the Bureij refugee camp. He lived in Gaza until 1967 after the occupation of the West Bank and Gaza Strip by Israel, he moved from Gaza to the Amari refugee camp in Ramallah where he lives with his family to this day. He has not seen his city since 1948, nor his father and mother, who died in Gaza in 1995. Today he is 90 years old and he told us the only wish he has is to die and be buried In Lod, in his hometown in dignity and not as a refugee.

Mosche Dajan led a raid on Lydda “blasting at everything that moved.”

Yitzhak Rabin signed expulsion order in 1948 (this photo from 1986)

History of the expulsion in 1948 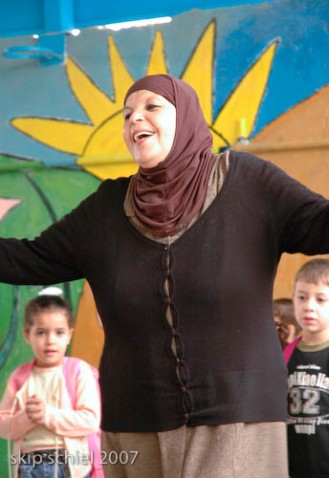 The Friends’ Play Center in the Amari refugee camp was operated by the Ramallah Friends School, and was located in one of several refugee camps in Ramallah. Thanks to Rosi Greenberg, kids and internationals designed and painted this mural—suggesting their dreams, not their reality (photos from 2007—in 2019 apparently the Center no longer operates).

As the bus drew up in front of the house, I saw a young boy playing in the yard. I got off the bus and went over to him. “How long have you lived in this house?” I asked. “I was born here,” he replied. “Me too,” I said.

—Father Oudeh Rantisi, a former mayor of Ramallah who was expelled from Lydda in 1948, visited his family’s former home for the first time in 1967.

Massacre at Dahmash mosque in al-Lydd

Home demolitions: A reminder that the Nakba never ended, By Rami Younis (2015)

Quakers with a Concern for Israel-Palestine—actions