A series from my earlier writing, not always directly about Palestine-Israel, this an attempt to understand and express my journey of discovery that continues to enthrall and mystify me.

(This version is expanded from what I presented at Bryant College in Smithfield RI.)

For the complete slide show that accompanied the original keynote presentation

A man was going down from Jerusalem to Jericho, when he fell into the hands of robbers. They stripped him of his clothes, beat him and went away, leaving him half dead. A priest happened to be going down the same road, and when he saw the man, he passed by on the other side. So too, a Levite, when he came to the place and saw him, passed by on the other side. But a Samaritan, as he traveled, came where the man was; and when he saw him, he took pity on him. He went to him and bandaged his wounds, pouring on oil and wine. Then he put the man on his own donkey, took him to an inn and took care of him. The next day he took out two silver coins and gave them to the innkeeper. ‘Look after him,’ he said, ‘and when I return, I will reimburse you for any extra expense you may have.’

[Jesus then asked the man who’d inquired about serving god] Which of these three do you think was a neighbor to the man who fell into the hands of robbers?

[The man replied], The one who had mercy on him.

Jesus told him, Go and do likewise.

The invitation from NEYM to give the keynote presentation came in 2004 while I was in Palestine, at a particularly low time in my five months there. Not only were political conditions looking again hopeless to me, but my life was not unfolding as I’d hoped. My arrangements with sponsoring organizations—the Palestinian university, Birzeit, and its Right to Education Campaign and the Ecumenical Accompaniers for Peace in Palestine and Israel— had borne minimal fruit, and one ended painfully. It was late December 2004, I had one month left, and I wasn’t sure who would accept my offer of volunteered photography. What’s the point? Why do this? I am away from home, from family and friends, from my core communities, trying to practice and offer my craft, and few seem interested. I despaired.

NEYM’s invitation—which I resisted accepting too quickly, needing some discernment time—affirmed what I’ve been trying to do for many decades: witness with my body, with my heart, all my emotions, with my camera, to various troubles worldwide.

I was very grateful for this opportunity to show an audience something of these images, and to try to put them into a useful context. I’d state my life task this way: seeing with my own eyes, despite the risk, coming to an understanding, showing the results, then inviting viewers to see with their own eyes and take action they feel is appropriate.

In 2003 NEYM session’s theme was expressed by the parable of the Good Samaritan, asking the question, who is my neighbor? And applying this question to racism and our Quaker connections with slavery. Many of us hope to continue this, not only in the United States but throughout the world. For me specifically in Israel-Palestine which I feel is rife with racism.

“Go and do likewise.”

That’s Jesus talking, highlighting the importance of helping others, when—and this is vital to the story as I see it—that act of charity, mercy, justice involves some risk. It’s not merely a story of one person helping another, but of others who had the opportunity to aid the poor beaten traveler along the Jericho Road choosing not to help. They did not take a risk; they refused to do the right thing. If they heard a call, they responded with something like, “sorry, too busy, got lots to do, not my business, another time perhaps.”

“Go and do likewise,” Jesus taught.

The theme of that year’s gathering drew on that rich parable, its closing words, and a reference to another Jesus story, that of the sower and the seeds (Luke 8: 15): “Go and do likewise …hear the word of God, hold it fast in an honest and good heart, and bring forth fruit with patience.”

The invitation also invited me to share some of my photographs from various journeys of discovery, so I will begin with several key journeys [photos available in the slide show, with a selection below]. In my witnessing with my camera, I hope to sow a few seeds of awareness and wisdom, and most importantly the seed of action, especially when that action entails risk. Light guides me, I seek the light, I am a slave of light. No photos without light, lousy photos when ignorant of the light. This little light of mine. Pass the light on. Awaken! As Thoreau so elliptically put it:

…but such is the character of that morrow which mere lapse of time can never make to dawn. The light which puts out our eyes is darkness to us. Only that day dawns to which we are awake. There is more day to dawn. The sun is but a morning star.

These are the very last words of his book, Walden.

I am fortunate to be able to undertake these journeys. I’ve arranged my life to be relatively free and quiet, economically and socially. My two daughters, in their 40s, are launched. My economic needs are very slender and many people have aided me. My loving Quaker community is a mainstay, both locally and internationally—in Palestine Quakers are my primary lifeline. And my former partner continues to be one of the supreme gifts of my life.  (I have probably slipped in [to the slide show] a few of her photos, they are often very good.) Angels carry me, I am directed by the still small voice, if I only give it the quiet it needs. And blessedly, I am aged, with fewer and fewer years before me, less and less reason to hold on to life.

The vehicle for many of my journeys is the Japanese Buddhist order, Nipponzan Myohoji. Their practice is mostly building peace pagodas—they have two in the United States, in Leverett Massachusetts and near Albany New York—and conducting pilgrimages and walks for peace and justice. They might be considered a Japanese incarnation of Mahatma Gandhi.

Photos from various journeys [from the slide show] 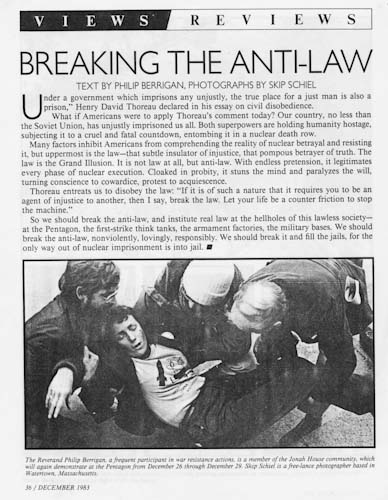 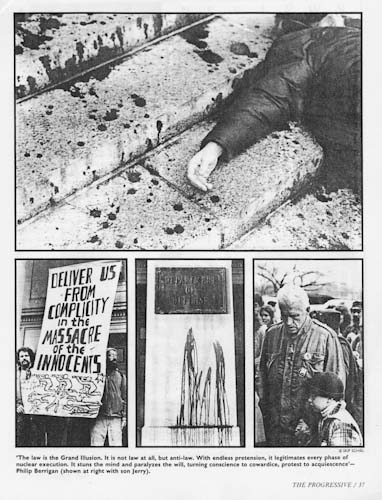 Mitakuye Oyasin: All My Relations 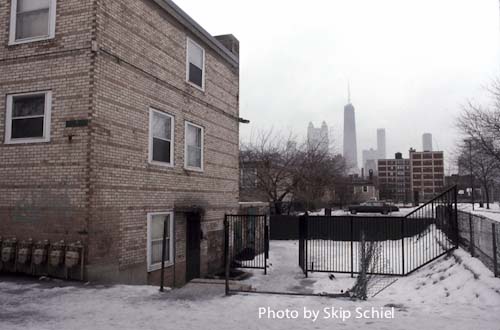 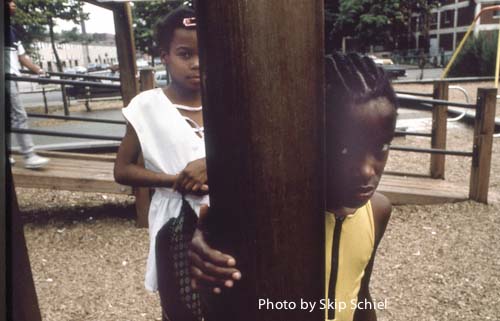 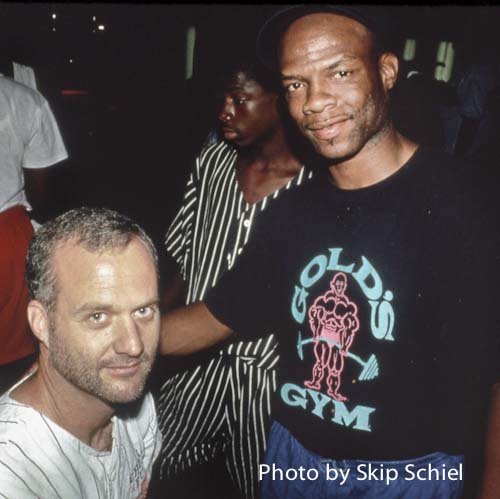 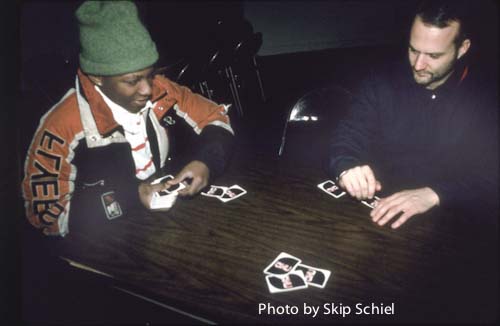 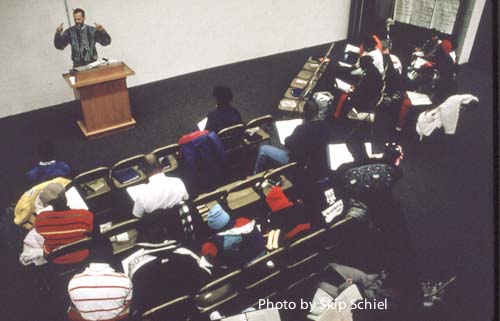 Auschwitz (1994 – 95)—tearful while walking to the main gate at night for the first night of Chanukah, my birthday, the chant and the community and the monks, a partner from Friends Meeting at Cambridge 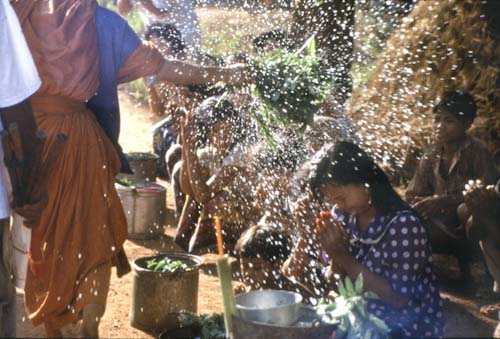 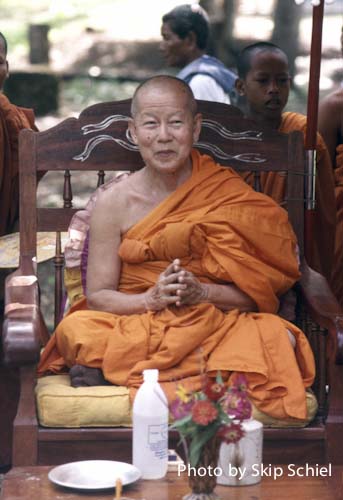 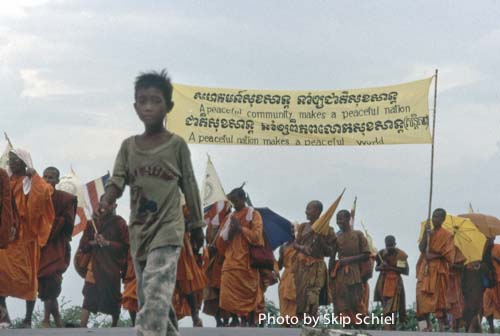 Cambodia (1995)—my fear the night before, unsettled, then calm

Statue of Sadako, the subject of the peace crane story 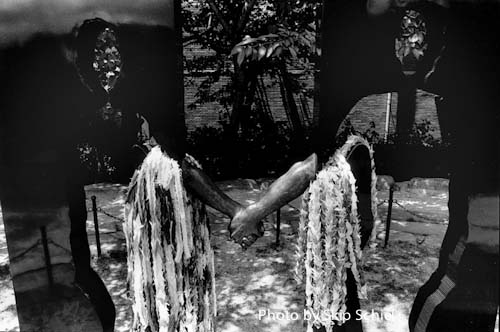 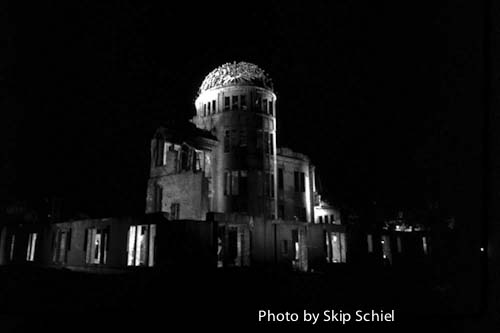 Japan (1995)—Hiroshima the city of peace, city of horror

A Spirit People: One View of the Interfaith Pilgrimage of the Middle Passage (1998-99)

South Africa (1999)—Margaret Bourke White’s stunning image of gold miners, an infectious icon that continues to inspire and guide me, discovering the importance of being present, from partnering to examining our own racism

And now Israel-Palestine (2003 – present)—suffering of all people, Jews (suicide bombed, for some a weapon of choice) and Palestinians (occupied, a method of choice), the light, physical and of wisdom, draws me, Christ’s footsteps, perhaps searching for the “true cross,” need to cry, shooting our taxi driver, secondary trauma, 3 college students in Gaza, Belal, Yousef 1 and Yousef 2.

I also include some of my series, Scent of Earth (1980 – present), here just trees and sky. Trees because they stem from a waking dream I had in 1982 while walking thru the wintry forest of the White Mountains. I distinctly felt the trees calling to me. They presented me with a plea: we feel the great fire coming, we are rooted and strong, but have no power to move out of the way or quench the fire. We call on you for help. This led to some of my work in the peace movement as well as a continuing devotion to trees.

The sky, while traveling, in no matter what hemisphere, the sky was always above me. Virtually the same sky day and night anywhere on the globe. I was comforted by this uniformity and have concentrated on sky every since that realization.

One of the most profound and frightening scriptural teachings for me comes from the gospel of John, and this will set the overall context for my presentation.

The Qattan Center for the Child Gaza